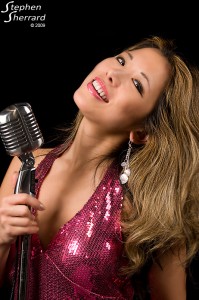 Sometimes you want to make a vocal sound wider, thicker, and fatter, but without excessive reverb or delays. Here are a few of my favorite methods for vocal widening.

Back when I worked at the big studio, we had a couple of Eventide H910 processors, and also an Eventide H3000.  This is how I learned about the micro pitch shift type of effects, that worked especially well to widen a vocal sound.  The effects were relatively simple, you just slightly detuned and delayed the audio on each side of the stereo field. For example, you might set the left channel to shift the pitch down by 8 to 10 cents, and delay by maybe 10ms. On the right channel, you would pitch up by 8 to 10 cents and use a slightly different delay amount, such as 15 or 20ms. The H910 units were mono, so we would use an FX send to send audio to both units, and pan the return of one left and the other right. The H3000 had a stereo micropitch preset built-in that gave you a good starting point similar to what I described. This effect wasn’t “static”, though. Due to the way these units processed pitch, there was always some subtle modulation and artifacts that contributed to that unique sound.

One of the first multi-effects processors I had for my own studio was the Ensoniq DP/4, which had a great “Detune & Spread” preset that did essentially the same thing. This was one of my “go to” vocal effects that got used more often than not, but tweaked and blended to taste.

Now that we are in the age of VST plugins, you can get this classic vocal sound in a lot of different ways, and often with the tools you already have.

My new favorite for this effect is the Soundtoys Microshift plugin. For a limited time they had the Little Microshift for free (no longer available for free, but included when you purchase the full version). Both of these are very good emulations of that classic Eventide micropitch effect, but the full Microshift plugin adds a unique Focus control that lets you zero in on certain frequency ranges. The plugin is very simple in operation, and since it has its own “Mix” knob, you can use it as an insert or as a send/return effect. Just remember, if you insert it on a mono vocal track it’s not going to give you the widening effect. It needs to have a stereo output to do its thing! I usually set it up as an FX send so I can use it on more than one track at a time and choose the amount with the send levels from each track. For large groups of background vocals, I will usually have all the individual background vocal tracks routed to a stereo group channel, on which I can insert the Microshift if I need to fatten/widen those vocals any more.

There is also Eventide’s own H3000 Factory plugin, which I own, and that has the classic micropitch preset, plus a lot of other cool effects as well. A very fun and useful plugin, especially for creative effects!

Before the H3000 and Microshift plugins, another favorite that I used often was the Roland Dimension D plugin on the UAD platform. Not exactly the same effect, but very cool and wide sounding when blended in appropriately.

But, what if you don’t want to spend the money on one of those plugins? There are several ways that you can simulate this type of effect manually, depending on the software you use.

One method is to take your vocal track and make two more copies of it. Then use whatever process you have available to pitch shift one of those copies up a small amount, and the other one down a small amount. The effect is even better if you use some type of pitch correction software or function that is trying to track the pitch and for which you can set the controls a bit differently for each track, so you get some modulation in the audio instead of just a simple straight pitch shift. If your DAW doesn’t have its own built-in pitch correction (such as VariAudio in Cubase), you could use something like Autotune, Waves Tune, Melodyne, or whatever you already own.  Then, shift the two tracks in time by very small amounts (usually about 10ms on one side and 15 to 20ms on the other), and pan one hard left and the other hard right while leaving the original vocal right down the center. Then blend those tracks to taste!

If you have a pitch correction or pitch shift plugin, you can create two effects tracks and insert a simple delay and your pitch plugin on each effects track, panning the output of one hard left, and one hard right. Sometimes I will do this with Autotune on two different FX tracks, and use different settings on each instance of Autotune while adjust the overall scale detune on one up slightly and down slightly on the other. Since Autotune tries to track and correct the pitch in real time, there is a constant modulation of the effect.

The key to these is to keep it subtle. If you have the effect too high in the track, it will sound too processed (although you may sometimes want that).

Sometimes, though, these effects just won’t work in a particular mix. So, what are some other alternatives to widen a vocal and give it a bit of stereo space without using a big reverb?

One choice for a more “organic” but wider vocal sound is often just a very short reverb. Put a touch of a very small “room” or ambient reverb on the voice, and adjust the controls of the reverb so you hear more of the “early reflections” and less of the tail. I will often also EQ the reverb return to soften or darken it a bit, which can help to fatten the vocal a bit without over-emphasizing the esses.

Another choice that I use often is a very short stereo delay, with the left and right channels set a bit differently, and set to modulate very subtly. You don’t want to hear it as a delay or echo, and usually not even long enough to sound like a slapback type effect. Soundtoys Echoboy is a great echo/delay unit that is my #1 choice for most delay and echo effects.  You can just choose their single delay and then use the many available options to stereoize and widen the signal in a non-static manner.

A new favorite that I recently acquired is the Waves Reel ADT. This one is very cool! It gives you some tape delay and modulation type effects that can go from very subtle to very extreme. There is even a dual version that basically gives you a separate ADT for left and right channels. This one will definitely be seeing a LOT of use in future mixes!

And, lastly, if you are recording your own vocals, there is always real doubling (or even tripling) of your vocals to fatten them up. You need to be a really good and accurate singer for this to give you the proper effect. You need to record your vocal at least 2 times and try to match it as closely as possible. If your timing and pitch are too far off, it will be sloppy and obvious. But, if you can keep your timing and pitch very close to the original, you will get that classic doubled-voice sound that is still not possible to reproduce exactly with any digital process. No matter how great you are, you will never match your pitch and timing exactly, and that’s what makes doubling work! It’s those random and subtle pitch and timing differences that give you that natural fat chorus type of sound. Blend the doubled track in to taste. Sometimes you’ll want to make it obvious, as it’s a common sound in pop/rock, but other times you’ll want to keep the double very low in the mix so that you don’t hear it as an obvious double, but just enough to fatten up the vocal.

Doubling won’t widen your vocal sound if you keep it panned right underneath the main vocal (the usual technique), but it really gives it a fuller and thicker sound.  Often I’ll use the real double track technique, and then apply some of the above widening effects as desired.  Many times, I’ll use just a small amount of widening on the main vocal track, and then I’ll apply a lot more widening on the double track (and will usually heavily compress that track to keep it at a constant level), and then blend the double in very subtly.  That can be a very cool sound in the right situation.

Got a technical question you want to see answered here?